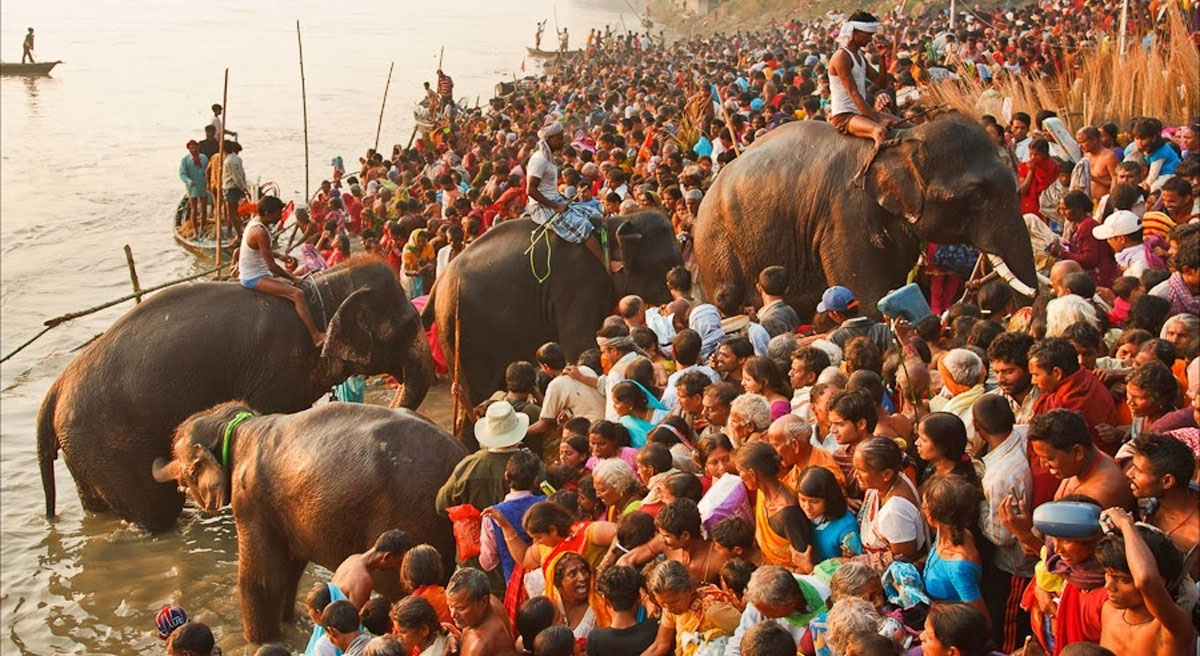 Sonepur Mela & Other Highlights of Bihar

Bihar’s reputation is largely lodged as keeper of Buddhist history with the circuit of Bodh Gaya, Nalanda, Vaishali and Rajgir, but it is the big and small fairs and festivals of the state that acquaint you with the true Bihar.

Sonepur Mela
The full moon day of Karthik Poornima of November holds special significance in Sonepur, a small town on the confluence of the Rivers Gandak and Ganges. Days before this, arrangements for the biggest cattle fair of Asia, Sonepur Mela, starts shaping up. Fifteen days that sometimes stretch for about a month are reserved in the buying and selling of different animals – donkeys, cows, horses, camels, birds, buffaloes, goats, hens and other poultry animals. The history of the mela dates back to the period when King Chandragupta Maurya (340 – 297 BCE) ruled over this region and used to buy elephants and horses. When in full swing, the Sonepur Mela is a window into the local life of Bihar as food stalls selling local food prop up, and craftsmen bring out their wares on the side of the streets. There is a festive energy in the air through the month and apart from traders, photographers and travellers flock the grounds.

Rajgir Mahotsav
October brings with it a time to celebrate the rich repository of music and dance from around the world, in the backdrop of the soothing town of Rajgir. The erstwhile capital of Magadha lights up with celebrations over three days, when masters of music, devotional songs, opera, folk dance, ballet or classical dance take to the stage to enthrall the audience. This festival held during last week of October attracts tourists in large numbers.

Makar Sakranti Mela
The month is dedicated to making pilgrimages to hot springs for a cleansing bath making flower offerings to the deities of the temples. One of the places that are associated with this 15-day festival is the Mandar hill in Banka district. Legends point to the incident when a great deluge witnessed the creation of an Asura (demon) who threatened the gods. Lord Vishnu came to the rescue and cut off the Asura’s head and piled up the body under the weight of the Mandar hill. It is also said that the famous panchjanya – the sankh (conch shell) used in the Mahabharata war is believed to have been found here on the hills. Another legend surrounds the hill; a serpent coil can be seen around it and it is believed that the snake god offered himself to be used as a rope for churning the ocean to obtain the amrit (nectar) in the famous mythological tale of Samudra Manthan.

Chhat Puja
A four-day long festival is celebrated to commemorate the Sun God, Surya and his wife Usha, in late October or early November. This is one of the most important festivals of Bihar where people travel from various villages to be at the edge of a holy River or pond. The festival is centered on prayers to help cure a variety of diseases, including leprosy, and helps ensure the longevity and prosperity of family members, friends, and elders.

Mithila- Marriage Market
Mithila becomes the venue for a unique festival called Saurath Sabha or the Mithila marriage market. In the scorching months of June, Mithila Brahmins gather in the vast mango grove in the village of Surath and discuss horoscopes and arrange marriages within the community. Though this is a small affair only engaging the Mithila Brahmins, it is a fascinating exercise that has been going on for eons.