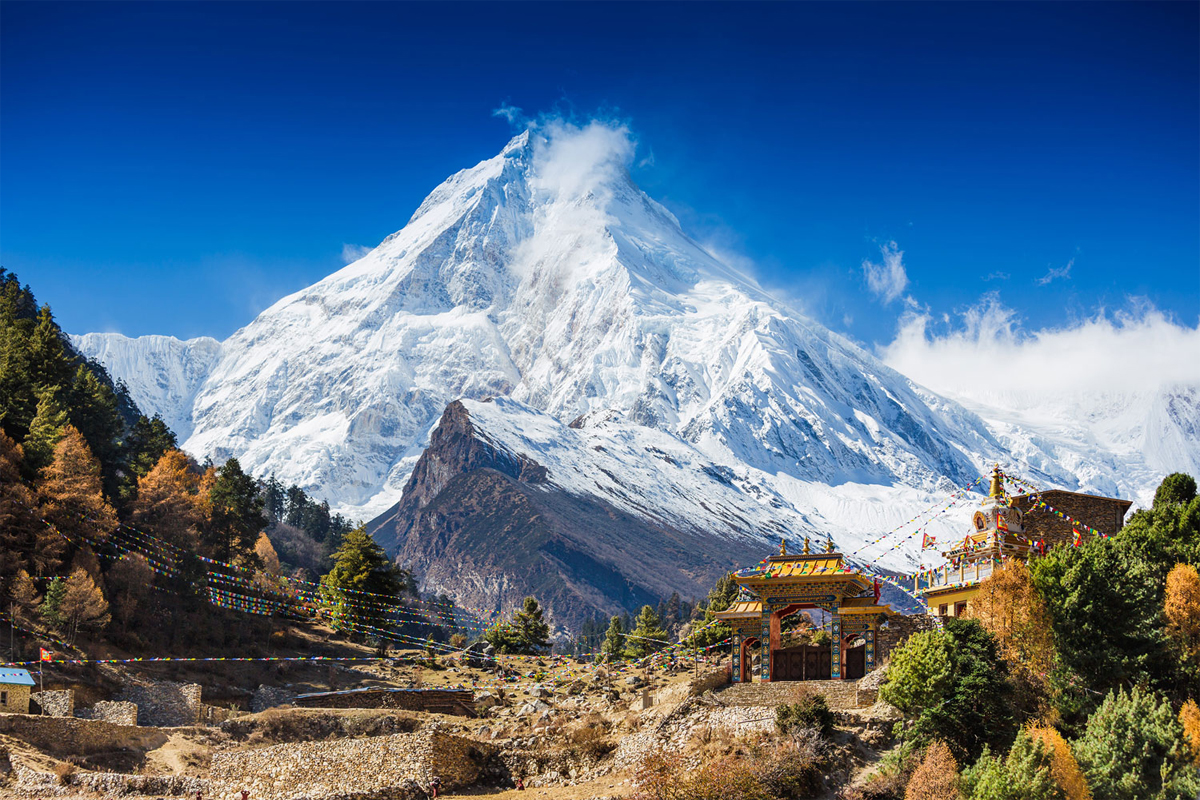 Nepal: The Roof of the World

Tucked cozily above India, Nepal has earned the sobriquet, “The Roof of the World”, because of the highest mountain it houses—the daunting, yet beautiful, Mt. Everest. Nepal also holds the accolade of being home to several UNESCO World Heritage sites. Listed as one of the best travel destinations of 2017 by Lonely Planet, Nepal has picked up the pieces after a devastating earthquake in 2015, and emerged stronger and more welcoming than ever. So, IA has compiled a list of the best-rated tourist destinations in the country that should be a part of everyone’s bucket list.

Kathmandu
From being a backdrop for the Marvel blockbuster, Doctor Strange, to being the premise of songs and videogames, Kathmandu is more than just a city. The capital of Nepal boasts of embracing new technology while keeping old traditions alive. With breathtaking Newari architecture in tow, Kathmandu is one of the most popular destinations in the world. For those seeking spirituality, Kathmandu has more than enough to offer. One can catch a glimpse of the living goddess at Kumari Ghar and learn more about the tradition of worshipping a young girl. Or visit the Budhanilkantha Temple to marvel at a 5-metre long idol of Lord Vishnu, cut from a single piece of granite. Or simply, practice yoga at one of the umpteen workshops that Kathmandu offers. The city is also famous for its Vipassana camps, where one returns to their humble roots and observes a 10-day silence period to rejuvenate the mind and soul. One can also channel their inner artisan and enroll in a course on woodworking, pottery, and painting in the city. And, those who believe the way to a person’s heart is through the stomach are sure to fall in love with the city. From lentil soups to momos (fried/steamed dumplings), the cuisine is sure to leave one wanting for more.

Bhaktapur
Bhaktapur is a town in the Kathmandu Valley that is reminiscent of the medieval era. With beautiful and intricate architecture, and vast royal plazas, the city oozes grandeur in every direction. The royal plaza, Bhaktapur Durbar Square, was branded as a World Heritage site and is awe-inducing at every step. The square not only attracts a huge amount of footfall but also contains a magnificently carved gate called the Lu Dhowka. It is common to find people waiting to take selfies under the gate which is carved with symbols from Hinduism. But that’s not all. The city also boasts of several attractions such as the Palace of 55 Windows, Mini Pashupatinath Temple, Nyatapola Temple and the statue of Bhupatindra Malla, a king belonging to the Malla dynasty that ruled the city. Bhaktapur resembles a city frozen in the past and provides for an enticing and immersive experience.

Pashupatinath Temple
Lord Shiva is associated with mysticism so it doesn’t come as a surprise that the Pashupatinath Temple attracts thousands of visitors every single day. Doubling as a cremation ground, the temple is a perfect example of the circle of life. Residing on the banks of River Bagmati, it is the largest temple in Nepal and a renowned World Heritage site. The main temple, with a gilded roof, silver-covered sides, and pagoda-style architecture, is one of the reasons why Pashupatinath mesmerizes everyone who visits it. And if one is lucky enough to visit the premises at 6 P.M., they are greeted by a grandiose aarti, where the priests worship the river amidst fanfare and hundreds of oil lamps—a truly magnificent sight to behold.

Changu Narayan
Allegedly one of the oldest temple in the country, believe to have built in 325 AD, Changu Narayan is located near the Kathmandu Valley. Sitting atop a hill, the temple is host to various festivals and is one of the cherished UNESCO World Heritage sites. Those visiting the temple during the festival of Ram Navami, can experience a sea of devotees and plays depicting the life of Rama—an incarnation of Lord Vishnu and touted as the ideal man—along with celebrations that can be described as impressive.

Bouddha Stupa
Another UNESCO Heritage site that makes this list is the Bouddha Stupa. Considered one of the largest in the world, the Stupa is an astonishing sight visible as you touch down in Kathmandu. The imposing white dome with the all-seeing eye of the Buddha painted on all sides on a gold spire and juxtaposed with simple prayer flags invokes feelings of not only admiration but also awe. Situated on an ancient Tibetan trade route, the site is popular among monks and tourists in general. From rotating the prayer wheel to admiring the monument from a rooftop cafe, Bouddha Stupa is one of the best-rated monuments in Nepal.

Swayambhunath
Lonely Planet describes Swayambhunath as a “definitive” experience. Dubbed as the Monkey Temple, Swayambhunath is full of Hindu and Buddhist iconography, along with its fair share of primates. Much like the Bouddha Stupa, the main stupa at Swayambhunath follows a similar architecture. It is one of the most sacred pilgrimages for Buddhists and is found to be frequented by tourists every day. The complex also boasts of a huge brass thunderbolt, a symbol of power in Tibetan Buddhism. From photo-ops to a rich spiritual history, Swayambhunath is a perfect place for tourists to inch a step closer to Nepalese tradition.

Patan
A UNESCO World Heritage site—Patan Durbar Square—to boot, Patan is known as the handicraft city of Nepal. The durbar square is known for its red-tiled floor and the exquisite Newari architecture. Even after the devastating earthquake, Patan has retained its magnificence and is a popular haunt for locals and tourists alike. The city is popular among NGOs and diplomats, which makes it one of the fairest cities in the country and provides for a safe environment. It also houses Newari Kitchen, a popular restaurant that serves authentic Newari cuisine. To gain insight into the simplistic lifestyle of Nepal, Patan is the best place to be at.

Lumbini
The birthplace of Siddhartha Gautama, or popularly known as Gautama Buddha, Lumbini is a must-visit spot of pilgrimage for both Hindu and Buddhist pilgrims. The Mayadevi Temple, according to archaeologists, marks the spot where Buddha was born. It houses monasteries that showcase different architecture styles. The dazzling white Royal Thai Buddhist Monastery is built in traditional Thai style, while one transports to China at the Zhong Hua Chinese Buddhist Monastery. On the other hand, the Myanmar Golden Temple follows the pagoda style with a white dome and gilded spire. Lumbini also boasts of the World Peace Pagoda, constructed by the Japanese for a whopping $1 million. This white domed structure contains a golden Buddha statue in the middle and contains an air of serenity and peace. Over 20 kms from Lumbini lays Tilaurakot, ruins that are touted to be Kapilavastu where Buddha spent his formative years. Lumbini is not restricted to Buddhists as the city provides a much-needed break from travel and helps one to unwind and explore spirituality.

Sagarmatha and Chitwan National Parks
Apart from Everest, Nepal is also popular for its picturesque national parks. Perhaps, that’s why UNESCO has chosen Sagarmatha and Chitwan as World Heritage sites. Sagarmatha is known for the unhindered views of Mt. Everest and other peaks. Full of gorges and glaciers, the park is also home to the endangered snow leopards, and if one is lucky, they can catch a glimpse. It also houses the national bird of Nepal, the Himalayan Monal or the Impeyan. Chitwan, on the other hand, is a lush jungle that is sure to grab the attention of wildlife enthusiasts. From tracking the royal Bengal tiger to spotting one-horned rhinos, the park has a lot in store. Chitwan also gives one the opportunity to visit elephant breeding farms and meet the gentle giants. And, if that doesn’t satiate the thirst, one can also go canoeing in River Terai, which is also known for its crocodiles. Frequented by tourists, the two parks are a perfect juxtaposition and one of the recommended places to visit.

Annapurna
The Annapurna mountain range is known as the one of the world’s best trekking trails. Thousands of trekkers head to the Annapurna Base Camp every year to fulfill their mountaineering desires. Though the Annapurna Circuit is three weeks long, there is something for everyone as one can choose a trek as short as three days. The picturesque valley is not the only thing in store though. For adrenaline junkies, Nepal provides the world’s longest and tallest zip line that whiz you past the beautiful Annapurna range and gets your heart racing.

Mount Everest
Last, but certainly not the least, on the list is the formidable Mt. Everest. Named after a Welsh surveyor, the highest mountain in the world stands 8848-m high and is a dream and a nightmare for mountaineers. Whether you are brave enough to reach the summit of the intimidating mountain or just the first camp, Mt. Everest invokes the human characteristic of conquering the unconquered. If mountaineering doesn’t tickle your fancy, there are helicopter rides that provide spectacular views of the mountain. Shining in the afternoon sun, Mt. Everest is definitely one of the must-visit places in the entire world. After all, where else can the adage, “on top of the world” hold true.