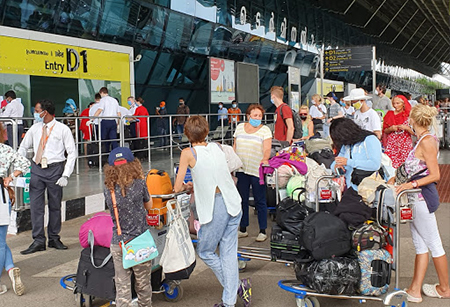 104 Russian Tourists Fly Back From Kerala

Kerala flew back 104 Russian tourists who had got stuck in the national lockdown following COVId-19 outbreak. The special plane of Royal Flight Airlines took off for Moscow via Kolkata and Yekaterinburg. While a majority of 75 of passengers were staying in different destinations in Kerala, like Varkala near the state capital, the rest of them were held up in Andhra Pradesh and Tamil Nadu. The operations were coordinated by Ratheesh C Nair , Honorary Consul of the Russian Federation, in Thiruvananthapuram. The home-bound passengers underwent the mandatory medical check-up and other formalities before boarding the flight. As many as 2500 stranded foreign tourists were repatriated from Kerala since the international airports were closed on March 23. They included 232 visitors to Germany, 268 to the UK, 112 to France and 115 to Switzerland. Tourism Minister Kadakampally Surendran said the state government had taken great care to ensure that the extended stay of the foreigners had been convenient and hassle-free. The Tourism Department officials were in constant touch with them to extend the best hospitality that Kerala is known for.