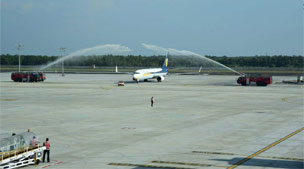 A new integrated international passenger terminal for commercial operation was inaugurated by the Kerala Chief Minister, Pinarayi Vijayan. The Chief Minister lauded the CIAL, the country’s first airport built under PPP model, which has heralded a new chapter in aviation history by becoming the first in the world that completely operates on solar power. The Chief Minister received passengers and crew who arrived at the new airport Terminal 3 via a Jet Airways flight from Muscat to Kochi. The first flight, which arrived at the new terminal, was received by ‘water salute’ as per tradition. The foundation stone for the project was laid in February 2014 in view of growth in passenger traffic through CIAL.  The terminal was inaugurated in February last year. It is having a peak hour capacity of 4000 passengers, according to a CIAL release. Vijayan also inaugurated the 4.3 km long four-lane road connecting the airport and National Highway at Athani near Aluva and also the expansion of the CIAL’s solar power capacity from 15.5 MW to 21.5 MW.