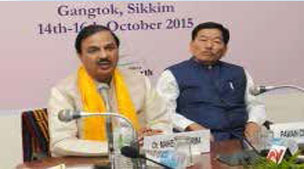 TImproving connectivity to remote, but remarkable tourism destinations in the North East of the country is the focus for the Tourism Ministry this year. The state of Sikkim is all set to get its own airport in Pakyong, 35 km away from the capital, Gangtok. The airport will be inaugurated by the end of the year in 2016. Road connectivity is yet another agenda, which is key to enhancing the North East experience for travellers. The announcement was made at the 4th International Tourism Mart (ITM), a trade fair that is organised by the Union Ministry of Tourism in association with the Northeastern states. With gargantuan efforts being made to showcase the rich and untapped potential of the Northeastern states, this only means that this is a whole new dimension of India for world travellers to explore. Sikkim was declared the first 100% organic state in the country in January and has a massive potential for travellers to enjoy a pristine Himalayan base, which is an excellent pick for trekking and adventure. The cleanliness and ‘no smoking drive’ of Sikkim have pegged it as one of the best destinations for the year 2016.