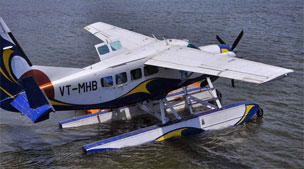 Goa has pioneered some of the most unique experiences for travellers in the Indian tourism industry. It holds the baton and leads the industry yet another time by introducing the concept of seaplanes, Heli-tourism and amphibious buses in the state. Though Maharashtra has already introduced the concept, Goa is likely to gather momentum with its robust tourist footfall. Dilip Parulekar, the Tourism Minister of Goa expects a boost of 14 percent in the tourist inflow due this infusion. The first successfu trial was held on the waters of the Mandovi River, off Panaji, preparing the states tourism body to mitigate any problems and roll out the plan smoothly. Given that seaplanes are a novel concept in India, it is bound to intrigue both local and foreign travellers. It also increases the spread of experiences that are currently offered in the state, apart from the golden brown beaches, laid back atmosphere and countless dining options that skirt the beaches. Apart from the beach experience Goa is well known for spice plantation trails and nature immersion as birding destination. Backed by the state government, the initiative is not directly owned or operated by Goa Tourism. The reins will lie in the able hands of MEHAIR, a private aviation company. “We are only providing them support to facilitate smooth operations,” said Parulekar at the occasion of the maiden seaplane landing. The seaplane routes start from Goa’s Dabolim airport to the meandering Mandovi and Chapora rivers and the popular Coco beach, a beautiful bay off Panaji.