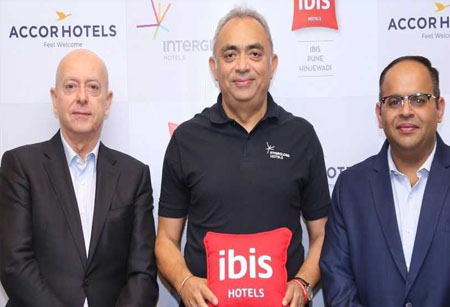 Accor Hotels has announced the opening of the 189-room ibis Kolkata Rajarhat, marking the debut of the brand in the City of Joy, Kolkata. This is the group’s 50th property in India, taking the brand’s total inventory in the country to over 3,000 rooms. At the recent launch, the multinational hospitality company also announced the arrival of a new strategy for the ibis brand, designed keeping in mind the demands of today’s travellers. Speaking at the launch, Jean-Michel Cassé, COO, AccorHotels, India and South Asia, said, “The ibis brand and hotels in India have been successful in integrating into the hearts of Indians and our partnership with InterGlobe Hotels has been integral to this success. Last year we launched ibism, a campaign curated specially for guests and employees and now with the launch of ibis Kolkata Rajarhat, we start a new revolution in the space of in-demand economy hotels.” Also speaking on the occasion, JB Singh, President and CEO, InterGlobe Hotels, said, “We are thrilled to mark our presence in this city with ibis Kolkata Rajarhat, the first internationally branded economy hotel in Kolkata. The manner in which the city has endured persistently is not only demonstrative of its strength and resilience, but also indicates its potential going forth.” ibis Kolkata Rajarhat features 2,457 sqft of a pillar-less meeting space that can further be divided into three smaller rooms with a capacity for up to 250 guests. Other facilities include Spice It, the multi-cuisine restaurant; a web corner with work stations as well as a 24-hour gymnasium.