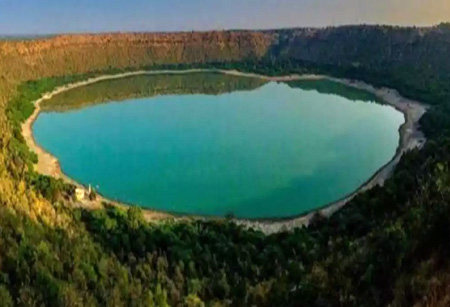 The Lonar Lake in Maharashtra’s Buldhana district has been chosen as a wetland site of international importance under the Ramsar conservation treaty, state Tourism Minister Aaditya Thackeray informed on Friday. He also uploaded two photographs of the site, taken by his father and Chief Minister Uddhav Thackeray who is known to be an avid photographer.

“I’m glad that the Lonar Crater is now officially a Ramsar Site. Having seen it for the first time in 2004, it is a sight captivating everyone. It has its own significance in the world of Biodiversity, Tourism, and Geology,” Aaditya Thackeray tweeted.

The Ramsar Convention on Wetlands of International Importance Especially as Waterfowl Habitat is a treaty for conservation and sustainable use of such sites.

It is named after Ramsar, the Iranian city where the treaty was signed in 1971, and places chosen for conservation under it are given the tag ‘Ramsar site’.

Lonar Lake was formed by the impact of a meteorite on basalt bedrock several thousand years ago.

An area of 365 hectares around the lake, which itself is spread over 77.69 hectares, was declared a wildlife sanctuary in June, 2000, as per a state forest department release.