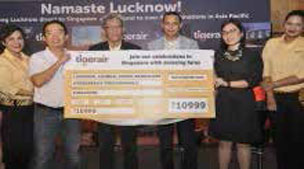 Lucknow gets a roaring connection to Singapore

Direct flights from Singapore to Lucknow make a foray this year. The inaugural flight already landed in early December. Tigerair, the airlines behind this, has pegged Lucknow as the sixth city in India which is connected to the eastern shores at Changi Airport. Tigerair will operate three weekly flights to the city. The airlines is eager to service the Indian travellers in North India and in turn creating better accessibility for Singapore travellers to touch India through Uttar Pradesh. “With our inaugural fare, we wish to provide the opportunity to travellers not only from UP but also other neighbouring districts to visit Singapore, experience the warmth of our services and explore the Tigerair network further. India has strong ties with Singapore and we are committed to increasing connectivity between India and Singapore,” was the message by Teh Yik Chuan, Sales & Marketing Director, Tigerair. A special return fare of INR 10,999 (with conditions) is available for purchase for travel between 12th January 2016 to–14th  April 2016.