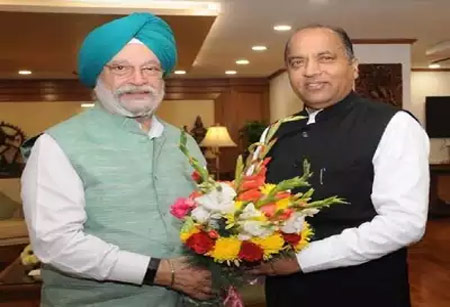 Mandi in Himachal will soon have an airport, gets green signal from Centre

Reaching Himachal will soon get easier and faster as the Centre has given a green signal for the construction of an airport in the hill town of Mandi. Himachal Pradesh Chief Minister Jai Ram Thakur made the news public after his meeting with the Union Minister for Civil Aviation, Housing and Urban Affairs Hardeep Singh Puri at New Delhi.

The CM informed that the new airport in Mandi will be constructed as a joint venture of the state government and the Airport Authority of India (AAI). He further added that the AAI will come up with a detailed project report in a week. On the other hand, the state government will begin the process of land acquisition for the airport.

Not only this, the minister also discussed how the move will help boost tourism in the state by good connectivity. He talked about possibilities of the landing of A320 aircraft at Gaggal and ATR74 aircraft at Shimla and Bhuntar airports. Other topics such as the expansion of runways of existing airports and of airports in the state were also discussed in the meeting.

In the meeting, the emphasis was given on strengthening air ambulance services project as it is an important facility, considering the rough geographical conditions of the state and rescuing tourists during extreme weather conditions.

Mandi, also known as Sahor, is one of the prime towns and a municipal council in Mandi district in Himachal Pradesh. The place is absolutely gorgeous and is a paradise for solitude seekers. Located along the River Beas, some 145 km from the state capital Shimla, Mandi remains pleasant all summer but experiences extremely cold winters.

The town is known for its some 300 old and new temples but the most significant ones are Panchvaktra Temple, Triloknath Temple and Ardhnareshwar Temple among others.