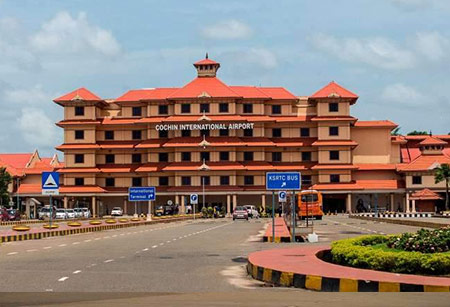 No daytime flights from Cochin International Airport for four months

The four-month long runway resurfacing work at the Cochin International Airport Ltd (Cial) is all set to start. As part of the works, flight operations from the airport will be suspended from 10am to 6pm till March 28, 2020. However, those who have booked tickets for the period will not be majorly affected since almost all services have been rescheduled to the available operational time of 6pm to 10am. Only five services have been cancelled during the major runway resurfacing period. “The winter schedule which came into effect from last week of October has already adjusted the services to the available operational time, which sees the cancellation of only one service in the international sector — Maldives service operated by SpiceJet — and four services in the domestic sector,” said an official communication from Cial. Cial had started the preparatory work for the runway-resurfacing project well in advance and thereby ensured minimal cancellation of services with the cooperation of airlines. Cial is the seventh busiest airport in the country and handles 240 aircraft movements and 30,000 passengers a day. They expect a rush in early morning and early evening hours as the operational time is going to be stipulated from 24 hours to 16 hours. In view of this, Cial has decided to increase the check-in time to three hours for domestic passengers and four hours for international passengers. Arrangements are made to ensure hassle-free passenger movement with the help of customs, immigration and groundhandling agencies. CISF, which manages airport security, has deployed 100 additional security men raising their total strength to 950. It has also decided to deploy another 400 security personals in the weeks to come. The airport which started functioning in 1999 underwent the first runway resurfacing work in 2009. Resurfacing is done to ensure the desired level of friction to facilitate precision landing for the aircraft. “An area of five lakh square metre comprising of the 3,400metre-long and 60metre-wide runway, and the taxiway links will be overhauled during the period. Parallel to this, Cial is realigning the lighting system from the existing CAT-1 to CAT-3 which will see the fixing of central line lights in every 15 metre, introduction of new lights at touch down zones and parking bays,” Cial said.