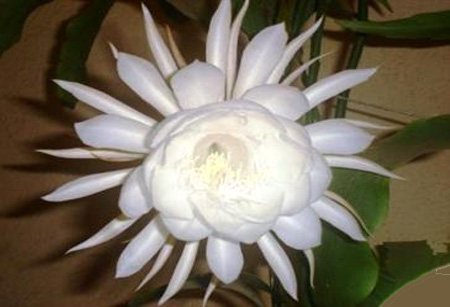 The rare Brahma Kamal, the only flower is known to bloom after sunset and just once a year, has been spotted in the higher reaches of the Himalayas in Uttarakhand.

It is said that Brahma Kamal – named after God Brahma, who is believed to have created the universe – takes about two hours to bloom to about eight inches in diameter. The flower only blooms for a few hours and is said to bring good luck and prosperity.

Scientifically known as Saussurea Obvallata, the flower finds mention in the scriptures and is offered in many holy shrines, including Kedarnath, Badrinath, and Tunganath.

Brahma Kamal is called the King of Himalayan Flowers and is also the state flower of Uttarakhand.

The flower is highly valued in Tibetan medicine and Ayurveda for its healing properties. It is extensively used by the local population to treat cuts and bruises.

Its natural habitat has been facing shrinkage over the last few daces because of global warming, human encroachment, and over-harvesting.

The state government has now started nurseries in the Chamoli district to conserve the flower and its sister species – all of which have great medicinal value.