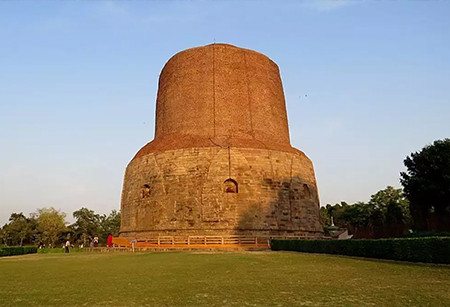 Sarnath to get more tourist facilities

Sarnath, one of the most sacred Buddhist sites of the country, located about 11 km from Varanasi, & where Lord Buddha delivered his first sermon after he attained enlightenment will soon witness massive development with The World Bank-funded Rs 100 crore project to provide world-class facilities for pilgrims, tourists and ensure employment for the local people.

Uttar Pradesh’s Minister of Tourism and Religious Affairs, Neelkanth Tiwari, said, “We are focusing on pilgrimage tourism sites that have high footfall of pilgrims and tourists but lack basic amenities and other world-class facilities.

“We will develop Sarnath with the fund of Rs 100 crore saved from the already completed or on-going World Bank-funded projects.” This would include development of pedestrian paths between Chaukhandi Stupa and the Sarnath railway station and better connectivity for all 26 Buddhist temples and monasteries with world-class roads, hotels and other tourist facilities.

He said that officials from the Tourism Department have been asked to explore the scope of work for the facilities in a manner that would ensure job opportunities for the locals.