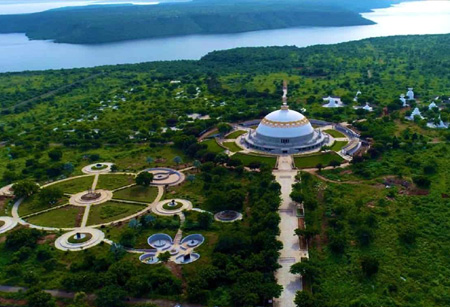 Telangana is all set to add a major tourist attraction as Buddha Vanam project, billed as the world’s largest Buddhist heritage theme park, is ready for inauguration.

The prestigious project, which is expected to attract international tourists, has come up on 275 acres at Nagarjuna Sagar, one of the country’s largest and famous dams and a major tourist centre located about 150 km from Hyderabad.

Claimed to be the country’s biggest Buddhist circuit, it houses Asia’s biggest dome, consisting of a stupa. The first phase of the project has been completed and is ready to be thrown open to people.

According to Telangana Tourism Department officials, the park has been developed as a key destination in the international Buddhist tourism circuit. It is expected to attract international tourists, especially from Tibet, Sri Lanka, Bhutan, Thailand, Singapore and other South-East Asian countries.

Historical finds collected from Buddhist sites have also been arranged in Buddha Vanam. The walls of Maha Stupa have intricate carvings which will take one back in time and show glimpses of the life of Buddha.

Tourism Minister V. Srinivas Goud had earlier said that the government would also set up a Men-Tsee-Khang, also known as Tibetan Medical and Astro Institute and a Buddhist University near the site.

The project was expected to be opened early this year but outbreak of Covid-19 and lockdown resulted in the delay.