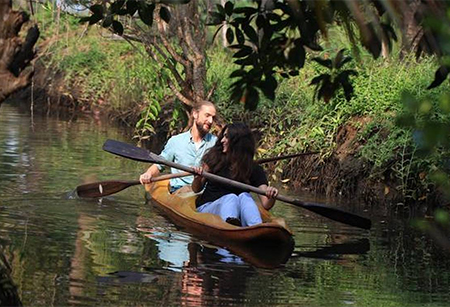 On successful implementation of ‘People’s Participation for Participatory Planning and Empowerment through Responsible Tourism’ (PEPPER) programme, Vaikom in Kottayam district of Kerala, has been officially declared a Tourism destination in Kerala’s tourism map. With this new status, Vaikom, an idyllic town on the northwestern end of Kottayam district, will now be promoted as an ideal Responsible Tourism destination for tourists to experience Kerala village life in all its glory by the tourism department.

The declaration of Vaikom as an official destination on the tourism map of Kerala was done by Tourism Minister of Kerala, Kadakampally Surendran. As a pilot destination, the PEPPER program implementation in Vaikom started in November 2017. The program has covered one Municipal area of Vaikom and nine village panchayats around it in a 10km radius.

The minister said that Vaikom displays an alternative model of tourism development with the full participation of the people and the local governments. He said that the similar tourism movement is shaping up in 48 other places in Kerala.

According to Rupesh Kumar, State Coordinator for RT Mission Kerala, nearly 1000 local people have been given training to be part of the tourism activities in Vaikom in the last couple of years. Investors Meet for the destination was conducted and 488 tourism ventures including 15 accommodation units were started in the area as an outcome. There are a dozen different tourism projects including a Global Tourism Village that is under development in Vaikom alone, Kumar said.